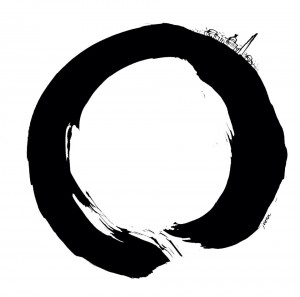 Ensō (円相) is a Japanese word meaning “circle” and a concept strongly associated with Zen. Ensō is one of the most common subjects of Japanese calligraphy even though it is a symbol and not a character. It symbolizes absolute enlightenment, strength, elegance, the universe, and the void; it can also symbolize the Japanese aesthetic itself. As an “expression of the moment” it is often considered a form of minimalist expressionist art.
In Zen Buddhist painting, ensō symbolizes a moment when the mind is free to simply let the body/spirit create. The brushed ink of the circle is usually done on silk or rice paper in one movement (Bankei, however, occasionally used two strokes) and there is no possibility of modification: it shows the expressive movement of the spirit at that time. Zen Buddhists “believe that the character of the artist is fully exposed in how she or he draws an ensō. Only a person who is mentally and spiritually complete can draw a true ensō. Some artists will practice drawing an ensō daily, as a kind of spiritual practice- Wikipedia
Thank you Juana Medina for such eloquent hand and gentle spirit!
-published with authorization from the artist